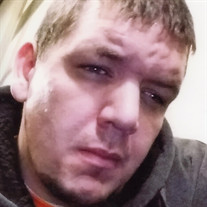 Nathan J. Norman, age 33, of West Frankfort, IL, passed away at 8:25 a.m. on Wednesday, February 5, 2020, at his home. He was born on Thursday, May 15, 1986, in Meridian, MS the son of Nathan Wayne Norman and Deborah Sue (Holt) Raines. His working career began working for Rent One as a delivery driver. He later began working for Timberline Fisheries of Marion, IL as a security guard for several years. Currently he was employed with Capstone Logistics of Mt. Vernon, IL. Nathan loved spending time outdoors with his children; visiting Giant City State Park south of Carbondale, IL and many other places of the area. He also enjoyed spending time gaming when he had the time. He was of the Baptist faith. He loved his family and children and enjoyed the times they had together. The memories created will now be cherished by those he leaves behind. He is survived by his mother and step father, Debbie and Ron Doty of West Frankfort; father, Nathan W. Norman of Missouri; son, Eli Norman of Cleburne, IL; three daughters, twins Hannah and Hailey Norman and Alivia Norman all of Cleburne, IL; the mother of his children, Gabriella R. “Gabby” Fasig of Cleburne, IL; two brothers, Kenny Norman, Charlie Raines and companion Cesily Mize all of West Frankfort; two sisters, Brittany Doty and Brennan Doty both of Dallas, TX; four nephews, Derek Raines, Daryl Raines and Charlie Rains all of West Frankfort and Parker Bailey of Dallas, TX, other extended family and many friends. He was preceded in death by his brother Jesse James Raines on August 15, 2016. Arrangements have been entrusted to Stone Funeral Home, 1201 East Poplar Street, West Frankfort, IL. The visitation will be from 5:00 p.m. until 7:00 p.m. on Tuesday, February 11, 2020, at the funeral home. Following the time of visitation the memorial service will be at 7:00 p.m. with Rev. Mike Cash presiding. For those who prefer, memorial contributions may be made to the “Stone Funeral Home”, to help with final expenses, and mailed in care of Stone Funeral Home, 1201 East Poplar St., West Frankfort, IL 62896. Memorial envelopes will be available at the funeral home. For additional information call the funeral home at 618-932-2161.

The family of Nathan Joseph Norman created this Life Tributes page to make it easy to share your memories.

Send flowers to the Norman family.