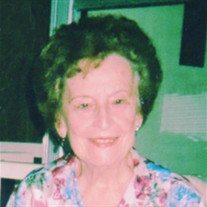 Opal L. Lillich, age 99, of West Frankfort, IL and former resident of Harlingen, TX passed away peacefully surrounded by her family at 1:02 p.m. on Sunday, August 12, 2018, at her home in West Frankfort. She was born on Tuesday, July 15, 1919, in Herrin, IL the daughter of Emmet and Mary Ann (Gilmartin) Smith. Opal was first united in marriage to Thomas Harold Crowell in Herrin. She later was united in marriage to James Allen Lillich in McLeansboro, IL and together they shared many years of marriage until his death in Texas. She began her working career at Smoler Brothers in Herrin for several years and later began teaching sewing classes for the Singer Sewing Company all throughout Southern Illinois until she retired. Opal was a member of the Height’s Church of God of West Frankfort and also a honorary member of the Elks Club of Harlingen, TX. She was always ready to be on the go. Opal enjoyed jewelry, dancing, and was an excellent seamstress. When she was out shopping, if she saw an outfit that she liked she would go home and make one exactly to fit herself or her family. She loved the social life and enjoyed visiting with her many friends at church and at the West Frankfort Elks. Though she was always busy and on the go a very important part of her life was her family. She enjoyed the many times they shared together and cherished the many memories that were created. Those she now leaves behind will also cherish the many memories that were created. She is survived by her daughter, Beverly Ann Cook of West Frankfort; grandson, Kevin Cook of West Frankfort; granddaughter, Debbie Stanley and her husband Randy of Orient, IL; two great granddaughters, Casey Lynn Stanley and Randi Marie Holland and her husband, Michael, all of West Frankfort; three great-great grandchildren, Aeyden James Moyer, Faye Marie Furlong, and Joseph Tyler Furlong all of West Frankfort, other extended family, and many friends. She was preceded in death by her parents, both husbands, and son, David Crowell who passed away on December 25, 1960. Arrangements for Opal L. Lillich have been entrusted to Stone Funeral Home, 1201 East Poplar St., West Frankfort, IL. The visitation was from 10:00 a.m. until 11:00 a.m. on Saturday, August 18, 2018, at the funeral home. Following the time of visitation the funeral service was at 11:00 a.m. with Rev. Mike Cash presiding. The prelude and postlude musical selections were recorded piano selections. Special vocal musical selections presented during the service were “Amazing Grace” and “How Great Thou Art” both by grandson, Kevin Cook with a recorded accompaniment. Interment followed next to her son, David, in Herrin City Cemetery of Herrin. Those serving as pallbearers were Robert Welborn, Kevin Cook, Aeyden Moyer, Casey Stanley, Randy Stanley, and Faye Furlong. For those who preferred, memorial contributions were made to “Hospice of Southern Illinois” and mailed in care of the funeral home. Memorial envelopes were available at the funeral home. For additional information please call the funeral home at 618-932-2161.

Opal L. Lillich, age 99, of West Frankfort, IL and former resident of Harlingen, TX passed away peacefully surrounded by her family at 1:02 p.m. on Sunday, August 12, 2018, at her home in West Frankfort. She was born on Tuesday, July 15, 1919,... View Obituary & Service Information

The family of Opal Loraine Lillich created this Life Tributes page to make it easy to share your memories.

Send flowers to the Lillich family.