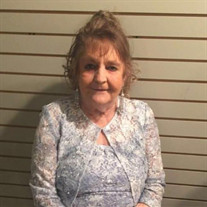 Pamela J. Stanley, age 69, of West Frankfort, IL, passed away at 1:46 p.m. on Thursday, January 23, 2020, in Herrin Hospital of Herrin, IL. She was born on Tuesday, July 4, 1950, in Herrin, IL, the daughter of Jack and Norma Catherine (Slane) Stanley. Pam was together with her lifelong companion James Harold “Tooter” Morgan for 43 years until his death. She was a homemaker the majority of her lifetime and enjoyed managing her home and seeing to the needs of her family. Pam was of the Christian Faith. In her spare time some of the things she enjoyed were; listening to country music, collecting family photos; dancing, always being the first on the dance floor and the last one off and camping and visiting with family and friends. Her family was the most important part of her life. She loved the many times they all would gather together and was always interested on all of their many activities, especially those of her grandchildren and great grandson. She was known as the “Glue of the Family”. The many memories that have been created will now be cherished by those she leaves behind. She is survived by three daughters and sons-in-law, Janet A. and Roger Dutton, Tina M. and Keith Watkins and Linda S. and John Sturgeon all of West Frankfort; six grandchildren, Nathan C. Watkins and Timothy E. Watkins both of Benton, IL, Adam L. Dutton and wife, Aarika, Shelby J. Dutton, Alexa M. Lee and husband, Cody and Ashtyn E. Sturgeon all of West Frankfort; great grandson, Carter D. Lee of West Frankfort; four brothers, Texas T. “Tex” Stanley and significant other, Laverne, Roger D. Stanley and wife, Vanda and Steve J. Stanley and significant other, Mary Ellen all of West Frankfort and Gail A. “Tooter” Stanley and wife, Becky of Orient, IL; two sisters-in-law, Dolores Stanley and Betty Slane both of West Frankfort, several nieces and nephews, other extended family and many friends. She was preceded in death by her parents and brother, Ronnie Wayne Slane. Arrangements were entrusted to Stone Funeral Home, 1201 East Poplar Street, West Frankfort, IL. The time of visitation was from 4:00 p.m. to 8:00 p.m. on Monday, January 27th at the funeral home. During the time of visitation a “Reflection of Life” DVD Memorial Tribute featuring special people, places and events in Pam’s life was presented to the family and friends. The funeral service was at 11:00 a.m. on Tuesday, January 28, 2020, with family member, Robert Stanley presiding. Robert also read a special poem requested by granddaughter Ashtyn and read comments of memory written by Ashtyn. The prelude and postlude musical selections were recorded instrumental selections. Special recorded vocal musical selections presented during the service were; “Oceans” by Hillsong United, “Amazing Grace (My Chains Are Gone) by Chris Tomlin, “See You Again” by Carrie Underwood and “Go Rest High on That Mountain” by Vince Gill. Interment followed in Denning Cemetery west of West Frankfort on the Orient Road. Pallbearers were Roger Dutton, John Sturgeon, Timothy Watkins, Keith Watkins, Nathan Watkins and Adam Dutton. Following the committal service at the cemetery the family and friends gathered the V.F. Outlet Banquet Room in West Frankfort, for a meal and continued time of fellowship and support. For those who preferred, memorial contributions were made to “The American Cancer Society” and mailed in care of Stone Funeral Home, 1201 East Poplar St., West Frankfort, IL 62896. Memorial envelopes were available at the funeral home. For additional information please call the funeral home at 618-932-2161.

The family of Pamela Jean Stanley created this Life Tributes page to make it easy to share your memories.

Send flowers to the Stanley family.