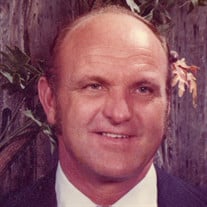 Paul H. Matheny, Sr., age 79, of West Frankfort, IL passed away peacefully with his family by his side at 2:28 a.m. on Sunday, August 31, 2014, at Westside Rehab Care Center of West Frankfort, IL. He was born on Thursday, October 25, 1934, in Springville, TN the son of Charles Oscar and Robbie Mavis (Nolen) Matheny. Paul attended school in Big Sandy, TN and was a graduate of Big Sandy High School. He was united in marriage to Bernida Deloma Briscoe on Saturday, August 6, 1955, in Chicago, IL and together they shared nearly forty-three years of marriage until her death on July 16, 1998. Paul began his working career as a Journey Finisher Iron Worker working high in the air over the city of Chicago, IL building high-rises and skyscrapers. In 1969, he moved his family to West Frankfort, IL and began working as an ironworker, overseeing the building of guardrails and fencing on the interstates of the area. He also started and operated Terrance Fence Company in Marion, IL for several years until he sold the business. In the late 1970’s he began working at Freeman Coal Orient No. 6 Mine until his health forced his to retire in 1983. He is a member of the Third Baptist Church of West Frankfort, IL and also a former member of both the Iron Workers Local Union No. 63 of Chicago, IL and the United Mine Workers of America. In his spare time he loved being in the outdoors, hunting and fishing. He began deer hunting at a very young age in TN and later in life took many trips out west hunting big game and fishing trips in the winter time to the southern states, especially enjoying fishing at Toledo Bend, TX. He also loved buying and trading guns of all kinds and enjoyed the “dealing and bartering” of the trade. He was an avid gardener, raising a large variety of vegetables. Though he always kept busy all of his lifetime working and pursuing his special interests, the most important part of his life was his family. He was always interested in their many activities and enjoyed the times sharing together. The many memories that have been created will now be cherished by those he leaves behind. He is survived by his son, Paul H. Matheny, Jr. of Johnston City, IL; two daughters and sons-in-law, Pamela Joy and Richard Bagley of Hillsboro, TN and Terry Lynne and J. Scott Williams of West Frankfort, IL; twelve grandchildren, Lori Parks and her husband, Shannon and Joni Holtz all of Crab Orchard, IL, Troy Williams and Ari Layne Williams both of West Frankfort, IL, Rick Bagley, Jr. and his wife, Brandy of Manchester, TN, Tim Bagley and his wife, Susannah of Morrison, TN, Elizabeth Bagley of Hillsboro, TN, Tyler Matheny, Amanda Matheny and Lexi Matheny all of West Frankfort, IL and Ian Matheny and Logan Matheny both of Johnston City, IL, nine great grandchildren, other extended family and many friends. He was preceded in death by his parents, wife and sister, Clara Mae Cuthbertson. Arrangements for Paul H. Matheny, Sr. were entrusted to the Stone Funeral Home, 1201 East Poplar Street, West Frankfort, IL. The visitation for the family and friends was on Thursday, September 4, 2014, from 11:00 a.m. to 1:00 p.m., at the funeral home. Following the time of visitation the graveside committal service was at 1:45 p.m. at Lakeview Cemetery, located northeast of Johnston City, IL with Paul’s sons-in-law, Rev. Richard Bagley and Chaplain J. Scott Williams presiding. Special recorded musical selections presented at the graveside were “I’ll Be There” by Scott Fowler and “Home, Where I Belong” by Mark Lowry. Pallbearers were Paul H. Matheny, Jr., Levi Parks, Tim Bagley, Richard Bagley, Jr., Scott Mocaby and Cody Holtz. Special recorded musical selection presented at the conclusion of the service was “Tennessee Waltz” by Anne Murray. After the committal service at the graveside the family and friends gathered at Paul’s daughter and son-in-law home, Terry Lynne and Scott Williams for a meal and continued time of fellowship and support. For those who preferred, memorial contributions were made to “Celtic Hospice”. Memorial contribution envelopes were available at the funeral home or were mailed in care of Stone Funeral Home, 1201 E. Poplar Street, West Frankfort, IL, 62896. For additional information please contact the funeral home by calling 618-932-2161.

The family of Paul H. Matheny, Sr. created this Life Tributes page to make it easy to share your memories.