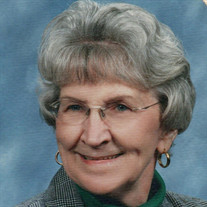 Priscilla D. Rennie, age 82, of West Frankfort, IL, passed peacefully at 4:00 a.m. on Sunday, March 13, 2016, in Frankfort Healthcare & Rehabilitation Center of West Frankfort after a long illness with Alzheimer’s. She was born on Sunday, October 1, 1933 in West Frankfort, the daughter of Rueben and Ora Mae (Smith) McElyea. Priscilla attended school in West Frankfort and was a graduate of West Frankfort High School Class of 1951. She was united in marriage to James A. Rennie on Saturday, February 3, 1951 in West Frankfort and together they shared nearly 50 years of marriage until his death on Sunday, January 14, 2001. Priscilla was a homemaker, always busy managing her home and seeing to the needs of her family. She was an active member of the First Baptist Church of West Frankfort until her health declined. She loved her church family and enjoyed volunteering for the clothing room and visiting with the ladies of the church. Priscilla and her husband enjoyed camping and had traveled all across this country. They were members of the Happy Campers Association for several years. She also was a member of the Eastern Star of West Frankfort and the Red Hat Society. She loved her grandchildren and was always interested in all of their many activities and enjoyed having sleepovers with them at her home. The many memories that have been created and family gatherings will now be cherished by those she leaves behind. She is survived by two sons and daughters-in-law, Michael and Kim Rennie of West Frankfort and John and Mary Rennie of Washington, IN; eight grandchildren, Shawn Rennie, Lauren Houseright and her husband Kyle, Danielle Baker and her husband Jeff, Michelle Rawlings and her husband Aaron, Dena Peavyhouse and her husband Andy, James Alan Rennie and his wife Ryoko, Sara Sciluffo and her husband Tony and Emily Bryant and her Fiancé Tyler, several great grandchildren; sister, Dorothy Nolen of Robinson, IL; two brothers and one sister-in-law, Ralph and Nancy McElyea of Aurora, IL and James Carl McElyea of West Frankfort; daughter-in-law, Vicky Rennie of West Frankfort, IL; sister-in-law, Mary McElyea of Elgin, IL, several nieces and nephews, other extended family and many friends. She was preceded in death by her parents, husband; son, James A. Rennie, Jr.; granddaughter, Heather Nicole Rennie; sister, Iris Wasuleski and brother, Ronald McElyea. Arrangements for Priscilla D. Rennie were entrusted to Stone Funeral Home, 1201 East Poplar Street, West Frankfort, IL. The visitation was from 11:00 a.m. until 2:00 p.m. on Thursday, March 17, 2016, at First Baptist Church, located at 106 West Oak Street in West Frankfort. Following the time of visitation the funeral service was at 2:00 p.m. with Rev. Mike Cash presiding. The prelude and postlude were recorded musical selections. Special recorded vocal selections were “Blessed Assurance” by Randy Travis, “How Great Thou Art” by David Nuvue and “Go Rest High on That Mountain” by Vince Gill. Interment followed next to her husband in Tower Heights Cemetery of West Frankfort. Pallbearers were Michael Rennie, Shawn Rennie, Jimmy Rennie, John Rennie, Aaron Rawlings, Jeff Baker and Kyle Houseright. Following the service the family and friends gathered at First Baptist Church for a meal and continued time of fellowship and support. For those who preferred, memorial contributions were made to “First Baptist Church Clothing Room" and mailed in care of Stone Funeral Home, 1201 East Poplar Street, West Frankfort, IL 62896. Memorial envelopes were available at the church and funeral home. For additional information please contact the funeral home by calling 618-932-2161.

The family of Priscilla Dean Rennie created this Life Tributes page to make it easy to share your memories.

Send flowers to the Rennie family.