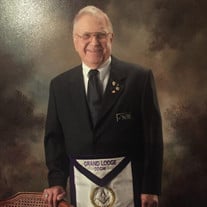 Ralph Eugene Sprague, age 97, of Thompsonville, IL, passed away peacefully at 2:05 p.m. on Tuesday, January 15, 2019, in Helia Health Care of Benton, IL. He was born on Saturday, March 5, 1921, in Marion, IL, the son of Wayne Walden and Eva Jane (Vinson) Sprague. Ralph was a lifelong resident and former Mayor of Thompsonville. He was a graduate of Thompsonville High School Class of 1939 and continued on with his education at Southern Illinois University before entering the United States Navy during World War II. He was united in marriage to Zoella Parkhill in West Frankfort, on Friday, August 13, 1948, and together they shared over 53 years of marriage until her death on August 23, 2001. He was a member of the Thompsonville First Baptist Church where he attended for many years. Ralph was owner and operator of Sprague Trucking and Excavation and worked for many years in the Oil Fields in Southern Illinois. He was active in the Masonic Lodge and held many offices and was a District Deputy Grand Master of District 10 of Southern Illinois, a Grand Lecturer, a member Akin Masonic Lodge No. 749, the Scottish Rites Bodies of Southern Illinois, the Franklin County Shrine Club of Benton, IL and was a member of the Akin American Legion James Dunford Post No. 1194. His family was a very important part of his life and he always enjoyed the times he shared with his family and friends. The many memories that have been created will now be cherished by those who knew and loved him. He is survived by his son and daughter-in-law, Kevin and Tammy Sprague of West Frankfort; grandson Timothy Sprague of West Frankfort, several cousins, nieces, nephews, other extended family and many friends. He was preceded in death by his parents; wife, Zoella Sprague and his brothers and sister. Arrangements for Ralph Eugene Sprague were entrusted to Stone Funeral Home, 1201 East Poplar St., West Frankfort, IL. The time of visitation was from 4:30 p.m. to 7:00 p.m. on Thursday, January 17th at the funeral home. At 5:00 p.m. during the time of visitation, Masonic Rites were accorded by the Akin Masonic Lodge No. 749. During the time of visitation a “Reflection of Life” DVD Memorial Tribute featuring special people, places and events in Ralph’s life was presented to the family and friends. The funeral service was at 11:00 a.m. on Friday, January 18, 2019, at Stone Funeral Home with Rev. David Schlag presiding. The prelude musical selections were recorded vocal selections; “In the Garden”, “Take My Hand Precious Lord” and “The Old Rugged Cross” all by Jim Nabors. Special recorded vocal musical selections presented during the service were “How Great Thou Art” by Elvis Presley, “Amazing Grace” by IL Divo, “When the Roll Is Called Up Yonder” by Jim Nabors and “You Raise Me Up” by Josh Groban. Interment followed in Pleasant Hill Cemetery of Thompsonville. Pallbearers were Tim Sprague, Ian Perkins, D.J. Hall, David Booker, Doug Karnes, Tom Henley and Matt Karnes. Military honors were accorded at the graveside by members of the American Legion James Dunford Post No. 1194 of Thompsonville, and members of the United States Navy Funeral Honors Detail. Following the committal service at the graveside the family and friends gathered at First Baptist Church of Thompsonville, for a meal and continued time of fellowship and support. For those who preferred, memorial contributions were made to “Akin Masonic Lodge No. 749” and mailed in care of Stone Funeral Home, 1201 East Poplar St., West Frankfort, IL 62896. Memorial envelopes were available at the funeral home. For additional information call the funeral home at 618-932-2161.

The family of Ralph Eugene Sprague created this Life Tributes page to make it easy to share your memories.

Send flowers to the Sprague family.