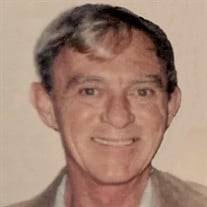 Ray Larrison, age 73, of rural Thompsonville, IL, passed away on Friday, April 16, 2021, at his home. He was born on November 25, 1947, in Vienna, IL, the son of Warren Franklin and Myrtle Marie (Orange) Larrison. Ray was a graduate of Century High School then attended Southern Illinois University Vocational Technical Institute studying Auto Mechanics. It was during this time he answered the call of this nation by serving in the United States Army from 1969-1971, during the Vietnam War. After his period of faithful service, he was honorably discharged with the rank of Specialist 4th Class. Upon returning home from the military, he enrolled again at Southern Illinois University Vocational Technical Institute studying Mortuary Science. After graduation, he began his life long career in funeral service at funeral homes in Southern Illinois and Florida taking great pride in helping families during times of loss. He was of the Protestant faith. He also was very involved in the Masonic Fraternal Organization. He currently was a plural member of the Fellowship Masonic Lodge A.F. & A.M. No. 567 of West Frankfort, IL, where he had served as Worshipful Master in the past and Akin Lodge A.F. & A.M. No. 749 of Thompsonville, IL, where he currently served as Treasurer. In his spare time, he enjoyed riding motorcycles, fishing, crossword puzzles, reading books (especially Western’s written by Louis L’Amour), listening to music of all types, writing poetry, and woodworking. He enjoyed planting a large garden every summer and giving away the full harvest to anyone. Many times, twice a day he would gather with all his friends at the “Talk of the Town Restaurant” of Thompsonville, just to keep up with everything going on. He found enjoyment being quiet sitting out on his porch and taking in everything nature provided. He will be remembered by many for his caring and giving spirit. He is survived by his son, Tracy S. Larrison of Chicago, IL, and Tracy’s mother, Jean Larrison of Mt. Vernon, IL; sister and brother-in-law, Linda and Roy John Logeman of Metropolis, IL; brother and sister-in-law, John and Beth Larrison of Metropolis, Il, a host of nieces, nephews, other extended family and many friends. He was preceded in death by his parents. Arrangements are entrusted to Stone Funeral Home, 1201 East Poplar Street, West Frankfort, IL. The graveside committal service will be on Wednesday, April 21, 2021, in Vienna Fraternal Cemetery of Vienna, IL. There will be a time of visitation from 10:30 a.m. until 11:30 a.m. at the cemetery. After the time of visitation, the committal service will begin at 11:30 a.m. with Masonic Rites accorded by the Akin Masonic Lodge No. 749 of Thompsonville, IL, followed by comments by Rev. Mike Cash presiding. The service will conclude with military honors being accorded by members of the Beggs-Gurley V.F.W. Post No. 5222 of Vienna, IL, and members of the United States Army Funeral Honors Burial Detail. For those who prefer, memorial contributions may be made to “St. Jude Children’s Research Hospital”. Memorial contributions may be mailed in care of Stone Funeral Home, 1201 E. Poplar Street, West Frankfort, IL, 62896. Memorial envelopes will also be available at the cemetery. For additional information call the funeral home at 618-932-2161. DUE TO HEALTH CONCERNS RELATED TO THE COVID-19 VIRUS AND BY THE SIGNING OF EXECUTIVE ORDER BY THE ILLINOIS GOVERNOR, if you are planning on attending the visitation and service the family is requesting you wear a mask and social distance yourself from others.

Ray Larrison, age 73, of rural Thompsonville, IL, passed away on Friday, April 16, 2021, at his home. He was born on November 25, 1947, in Vienna, IL, the son of Warren Franklin and Myrtle Marie (Orange) Larrison. Ray was a graduate of Century... View Obituary & Service Information

The family of Ray Larrison created this Life Tributes page to make it easy to share your memories.

Send flowers to the Larrison family.