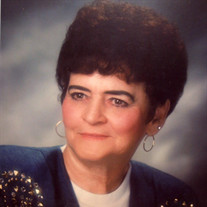 Rosalie Riddle age of 82, passed away on Tuesday, March 6, 2018 at 4:05 a.m. at Helia Healthcare in Benton, IL. Rosalie was born on Sunday, June 23, 1935 in Mt. Vernon, IL, the daughter of Lloyd and Ruth (Johnson) Hicks who preceded her in death. She grew up and attended school in Mt. Vernon, IL. She married Furman Edward Riddle on Thursday, October 26, 1950 in Piggott, Arkansas, and together they shared over fifty-eight years before his death on Monday, November 17, 2008. Rosalie was of the Baptist faith. She was a homemaker and enjoyed caring for her family and spending time with them. She also enjoyed raising flowers and was a good cook, having been known for her great fudge. The many memories created will now be cherished by those she loved and leaves behind. Rosalie and Furman had five children together and of her family she was preceded in death by two sons, Roy Riddle and John Riddle; granddaughter, Tara Riddle Hallis; grandson, Billy McClement; three brothers, Charles Stanley Hicks, Clarence Hicks and Lloyd Hicks, Jr.; three sisters-in-law, Gena Ware, Barbara Ruble, and Nancy Dawe; and two brothers-in-law, Harry Riddle and Bill Riddle. She is survived by two daughters, Vickie McClement and husband, Bill, and Cheryl Riddle; son, Randy Riddle, and wife, Donna, all of West Frankfort, IL; ten of her twelve grandchildren, Roy Riddle, Jr. and wife Brandy, Melissa (McClement) and Steve Engler, all of West Frankfort, IL, Shelly (Riddle) and Paul Ferguson of Wingo, KY, Amie Riddle Bennett of KY, Jason and Tiffany Riddle, John Riddle, Chelsea Riddle, Nicole (Riddle) and John Murphy, Nick Riddle, and Zack Riddle all of West Frankfort, IL; many great grandchildren; brother, George Hicks of Joliet, IL; three sisters, Barbara Hicks Sanders of Mt. Vernon, IL, Carleen Hicks Coleman of Woodlawn, IL, and Brenda (Hicks) and Carl Volanski of West Frankfort, IL; one brother-in-law, Jerry Riddle of West Frankfort, IL, two uncles, Bill Hicks of Windsor, IL and Jeep Reece from Decatur, IL; three sisters-in-law, Lillian and Elmer Blankenship of Indianapolis, IN, Sue and Robert Rogers of West Frankfort, IL, and Judy Crawford of Harrisburg, IL; other extended family members; and many friends. Arrangements for Rosalie Riddle have been entrusted to Stone Funeral Home, 1201 East Poplar St., West Frankfort, IL. The time of the visitation will be from 11:00 a.m. until 2:00 p.m. on Saturday, March 10th at the funeral home. The funeral service will be at 2:00 p.m., on Saturday, March 10th, 2018, at the funeral home with Rev. Guy Webster presiding. Interment will follow next to her husband in Tower Heights Cemetery in West Frankfort, IL. For those who prefer, memorial contributions may be made to “Franklin County Animal Control” and mailed in care of the funeral home. Memorial envelopes will be available at the funeral home. For additional information call the funeral home at 618-932-2161.

The family of Rosalie Riddle created this Life Tributes page to make it easy to share your memories.

Send flowers to the Riddle family.