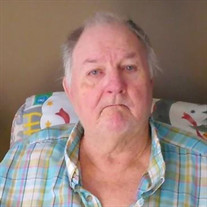 Roy V. Shaw, age 74, of West Frankfort, IL, passed away peacefully at 8:30 P.M. on Tuesday, December 22, 2020, at his home. He was born on Saturday, March 30, 1946, at home in Steel City, IL, located in Franklin County, the son of Herschel and Ruth (Hall) Shaw. He was raised by his grandparents Frank and Emma Shaw. Roy attended his early years of school going to country schools located near Steel City. He later attended high school in Benton, IL, and was a graduate of Benton High School Class of 1964. Earlier in his working career he worked at a Pallet Factory in Peoria, IL and later after he moved back to the Southern Illinois area he did various jobs. He was united in marriage to Patricia “Pat” Ruth Veteto on Thursday, February 18, 2010, in Pat’s home in West Frankfort, and together they have shared over 10 years of marriage. In his spare time, Roy always was always busy. He enjoyed fishing and just about anything involving guns, knives, motorcycles and cars just to name a few. He loved watching old westerns on television; especially Gunsmoke and Bonanza. He also enjoyed watching professional wrestling and going all over the region singing Karaoke. Roy was known for being a person trying to be a friend to everyone. He loved being around his family and many friends. The many memories created will now be cherished by those he leaves behind. He is survived by his wife, Pat Shaw of West Frankfort; son and daughter-in-law, Chester Leeroy and Tracy Joplin of West Frankfort; two daughters and sons-in-law, Melissa Ann and Frank Parrott of West Frankfort and Lisa Charlynn and Kevin Wininger of West Frankfort, 10 grandchildren, 15 great grandchildren; two sisters, Norma Henderson of West Frankfort and Maxine Lockeby of Mt. Vernon, IL, other extended family and many friends. He was preceded in death by his parents, his grandparents who raised him and three sisters who were stillborn. Arrangements have been entrusted to Stone Funeral Home, 1201 E. Poplar Street, West Frankfort, IL. At this time there will not be any services scheduled. For additional information call the funeral home at 618-932-2161.

The family of Roy Vernie Shaw created this Life Tributes page to make it easy to share your memories.

Send flowers to the Shaw family.