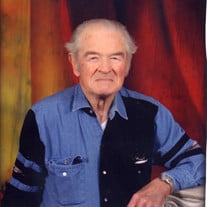 Russell L. McLain Jr., age 84, of rural West Frankfort, IL, passed away at 10:45 a.m. on Tuesday, August 18, 2015, at his home. He was born on Wednesday, March 11, 1931, in Springfield, IL the son of Russell Lowell and Mabel (Malcolm) McLain. At an early age his family moved to West Frankfort. He attended school in West Frankfort and was a graduate of West Frankfort High School Class of 1949. He answered the call of this nation by enlisting in the United States Air Force during the time of the Korean War in February of 1951, and was stationed in Las Vegas, NV. After his period of faithful service he was honorably discharged in February of 1955, with the rank of Staff Sergeant. After his discharge went to St. Louis, MO and began working for the McDonnell Douglas Corporation for several years. He later returned to West Frankfort and worked for the West Frankfort Fire Department for some time until he started his long career with the United States Postal Service. For thirty-three years he served as a postal carrier both in town and later as a rural carrier in the West Frankfort area. Also during his working career he served as director of the Civil Defense. Russell was first united in marriage to Ethyl Joyce Nolen. Later he was united in marriage to Jenifer L. Sullivan on Saturday, January 27, 1973, in West Frankfort and together they have shared over forty-two years of marriage. He was a member of the Second Baptist Church of West Frankfort. Some of his other memberships included the Williamson County, IL Gun Club, the American Legion Post No. 1961 of Orient, IL and the Rural Carriers Association. In his spare time he enjoyed woodworking, talking on the phone and having a cup of coffee at the area restaurants with his many lifelong friends. Though he always kept busy with his work and his other activities his family was a very important part of his life. He always was interested and encouraged them in their activities. The many memories that have been created will now be cherished by those he leaves behind. He is survived by his wife, Jenifer L. McLain of West Frankfort, IL; son and daughter-in-law, Russell L. “Rusty” McLain III and his wife Rhonda K. of Rockton, IL; three daughters and two sons-in-law, Rhonda Joy McLain of Phoenix, AZ, Kathy and Scott Tockstein of Marion, IL and Laura and David Auten of Benton, IL; eight grandchildren, Eric T. McLain and his wife, Amanda of Sidney, MT, Sabrina Nicole Monchino and her husband, Matt of Herrin, IL, Tonya L. Mahan of Austin, TX, Amy Presley and Kendall Presley both of West Frankfort, IL, Steven Presley of Independence, MO, Andrea Holman and her husband Mark of Nashville, TN and Hannah Auten of Benton, IL, seven great grandchildren; sister, Shirley Divan of Sun City West, AZ; brother and sister-in-law, Richard and Elaine McLain of Mt. Vernon, IL, other extended family and many friends. He was preceded in death by his parents; son, Rick Alan McLain in 1988; brother, James R. McLain and nephew, Darrell Richard McLain. Arrangements for Russell L. McLain Jr. were entrusted to the Stone Funeral Home, 1201 East Poplar St., West Frankfort, IL. Services were private at the funeral home at 10:00 a.m. on Friday, August 21st with Pastor David Nolen presiding. The prelude and postlude musical selections were recorded piano selections. Special recorded vocal musical selection presented during the service was “Amazing Grace” by The Statler Brothers. Interment followed near his parents in Union Chapel Cemetery located east of Texico, IL. Pallbearers were Scott Tockstein, Matt Monchino, Steven Presley, David Auten, Russell L. McClain III and Wendell Presley. Military honors were accorded at the graveside by members of the American Legion Post No. 141 of Mt. Vernon, IL. Presentation of the flag to Russell’s wife Jenifer was by Commander Ernie Collins. Following the graveside committal service at the cemetery the family and friends gathered back at the Second Baptist Church of West Frankfort for a meal and continued time of fellowship and support. For those who preferred, memorial contributions were made to either “Friday Snack Bags” a ministry through Second Baptist Church of West Frankfort that helps provide food to children for the weekends or to the “Franklin County Animal Shelter”. Memorial contribution envelopes were available at the funeral home or were mailed in care of Stone Funeral Home, 1201 East Poplar St., West Frankfort, IL 62896. For additional information please contact the funeral home by calling 618-932-2161.

The family of Russell Lowell McLain Jr. created this Life Tributes page to make it easy to share your memories.

Send flowers to the McLain family.