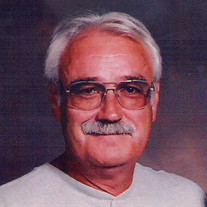 Stephen R. Shelley, age 65, of Carterville, IL, formerly of West Frankfort, passed away at 12:49 p.m. on Sunday, February 1, 2015 at his home. He was born on Tuesday, March 29, 1949, in Williamsport, IN the son of James E. and Elsie Mae (Flint) Shelley. He answered the call of this nation by serving in the United States Navy and after his period of faithful service was honorably discharged. Stephen was united in marriage to Rebecca Flint, on Saturday, November 3, 1973, and together they shared over twenty-eight years of marriage until her death on May 27, 2002. He was of the Protestant faith and was a member of the VFW Baker-Ladd Post No. 1567 of Herrin, IL. He was employed for many years by Southern Illinois Pest Control in Benton, IL until he retired in 2010. He is survived by his daughter, Reyna Shelley of West Frankfort, IL; two sons, Rustin Shelley and fiancé, Jennifer Behm of West Frankfort, IL and Ryan Shelley and fiancé, Sarah Davis of Denton, TX; sister and brother-in-law, Sandra and Roy Gossett of Crawford, IN, other extended family members and many friends. He was preceded in death by his parents and wife. Arrangements for Stephen R. Shelley were entrusted to the Stone Funeral Home, 1201 East Poplar Street, West Frankfort, IL. Visitation was from 11:00 a.m. until 1:00 p.m. on Thursday, February 5, 2015, at the funeral home. Following the time of visitation the memorial service was at 1:00 p.m. with Rev. Bill Perry presiding. Comments of memory were presented by Jennifer Behm. Interment followed in Tower Heights Cemetery of West Frankfort, IL. Military honors were accorded at the graveside by VFW Baker-Ladd Post No. 1567 of Herrin and the United States Navy Funeral Honors Detail of St. Louis, MO. For those who preferred, memorial contributions were made to “VFW Baker-Ladd Post No. 1567”. Memorial envelopes were available at the funeral home or were mailed in care of Stone Funeral Home, 1201 E. Poplar St., West Frankfort, IL 62896. For additional information please contact the funeral home by calling 618-932-2161.

The family of Stephen Ray Shelley created this Life Tributes page to make it easy to share your memories.

Send flowers to the Shelley family.