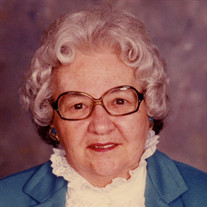 Valena M. Walker, 97, formerly of West Frankfort, IL passed to be with her Lord, Jesus Christ, on December 26, 2014 in West Melbourne, FL. Born to Charles and Della (Mick) Scott on May 1, 1917 in Rosiclare, IL. Valena married Harry E. Walker in West Frankfort on June 28, 1934. They shared their lives as husband and wife for 40 years before Harry’s passing in 1974. Together they served the Lord faithfully and were youth leaders at Harmony Freewill Baptist Church. For many more years, Valena was an active member of the First Church of God in West Frankfort. She was preceded in death by a brother, Charles Coy Scott, one step-brother, Willis Scott, and grandson, David Podbielski, and a great-grandson, Patrick Elliott. A surviving half-brother, Frank Scott, resides with his wife Barbara in Australia. Valena and Harry were blessed with four children, all still living, seven grandchildren, and many great grandchildren, nieces, and nephews. The four children (and spouses) are Janet Galli (Albert) of West Frankfort, Charles Walker (Stephanie) of Sebastian, Florida, Carol Podbielski of Stuttgart, Arkansas, and Tim Walker (Ingrid) of Murphysboro, Illinois. The six surviving grandchildren are Jim Galli, Vicki Elliot, Chris Podbielski, John Walker, Sarah Bayne, and Alan Walker. Valena enjoyed activities and fellowship at the West Frankfort Women’s Club where she served multiple terms as its President. Valena was also involved with the Frankfort Area Historical Society and the Southern Illinois Earth Science Club (S.I.E.S.C.). Valena served as Secretary/Treasurer of S.I.E.S.C. during her husband’s service to the club as its President. Arrangements for Valena M. Walker have been entrusted to the Stone Funeral Home, 1201 East Poplar Street, West Frankfort, IL. Graveside services will be held at Denning Cemetery, West Frankfort, on Saturday, January 3rd at 2:00 P.M. Family and friends are encouraged to gather there and share their thoughts and memories about Valena’s life. Burial will follow in Denning Cemetery West of West Frankfort, with Pastor Glendall Toney presiding. For those who prefer, memorial contributions may be made to a charity of choice. Memorial contribution envelopes will be available at the time of the service or may be mailed in care of Stone Funeral Home, 1201 East Poplar St., West Frankfort, IL 62896. For additional information please call the funeral home at 618-932-2161.

The family of Valena M. Walker created this Life Tributes page to make it easy to share your memories.

Send flowers to the Walker family.