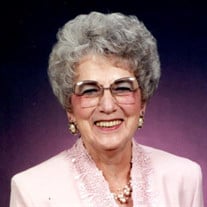 Virginia M. Grosco, age 97, of Benton, IL, formerly of West Frankfort, IL, passed away peacefully with her family by her side at 11:54 p.m. on Monday, May 18, 2020, in the Helia Healthcare Center of Benton. She was born on Saturday, September 30, 1922, in West Frankfort, IL, the daughter of David Henry and Emma (Graul) Martin. Virginia grew up and attended school in West Frankfort, and was a graduate of West Frankfort High School Class of 1941. She was married three times during her lifetime. The first marriage was to Homer Grizzell on Saturday, June 14, 1941, and together they enjoyed 35 years of marriage until his death on Monday, June 14, 1976. She later was united in marriage to Carl Babcoke on Sunday, June 26, 1977, and together they shared nearly 14 years of marriage until his death on Saturday, June 1, 1991. She later was united in marriage to John E. Grosco on Saturday, October 14, 1995, in Benton, IL, and together they shared nearly 6 years of marriage until his death on Monday, March 26, 2001. Virginia’s working career was with People’s Saving Bank of Evansville, IN, from 1960 until 1975, as a Safe Deposit Clerk. She later moved to Kansas City, MO, and began working with the Deluxe Check Printers Corporation as a customer service representative in 1978, and remained there until her retirement in 1991. After her retirement she then moved back to West Frankfort. She was a member of Second Baptist Church of West Frankfort. In her spare time she enjoyed sewing, having made many wedding gowns for brides. She also enjoyed baking and was known for her “Popcorn Cakes” at Christmas Time. She loved all of her family and looked forward to the many times they all gathered together and was known as the photographer at many of these events. She never was blessed with any children but loved all her step children, nieces, nephews and other extended family and was always interested in hearing about all of their many different activities. The memories that have been created will now be cherished by those she leaves behind. She is survived by her stepson, Steve Babcoke of Denver CO; step daughter, Sylvia Williams of Denver, CO; seven nieces, Elizabeth “Lib” Troutt of West Frankfort, Genell Davis currently of Benton and formerly of West Frankfort, Shirley Davis of Benton, Joyce Oakley and husband, Ken of Benton, Marsha Wilson and husband, Tim of Benton, Karen Bucalo and husband, Ken of Byrnes Mill, MO, and Phyllis Rose of St. Peters, MO; four nephews, Steve Martin and wife, Alice of Mt. Vernon, IL, Donald Martin and wife, Patti of Centralia, IL, John Hamilton and wife, Diane of Williamstown, MO and Terry Hamilton and wife, Sabrina of Festus, MO, many other great nieces, great nephews, other extended family and many friends. She was preceded in death by her parents, three husbands; two sisters, Hallie Davis and Helen Hamilton and three brothers, Joe E. Martin, Harry Lee Martin and Carl Martin. Arrangements have been entrusted to Stone Funeral Home, 1201 E. Poplar Street, West Frankfort, IL. DUE TO HEALTH CONCERNS RELATED TO THE COVID-19 VIRUS AND BY THE SIGNING OF EXECUTIVE ORDER BY THE ILLINOIS GOVERNOR, the service will be private with Virginia’s Pastor, Rev. Dr. Brett Beasley presiding. Interment will be next to her first husband Homer Grizzell, in Mulkeytown Cemetery of Mulkeytown, IL. For those who prefer memorial contributions may be made to either/or both “St. Jude Children’s Research Hospital” and/or “Shriners Hospitals for Children”. Memorial contributions may be mailed to the Stone Funeral Home, 1201 E. Poplar Street, West Frankfort, IL 62896. For additional information call the funeral home at 618-932-2161.

Virginia M. Grosco, age 97, of Benton, IL, formerly of West Frankfort, IL, passed away peacefully with her family by her side at 11:54 p.m. on Monday, May 18, 2020, in the Helia Healthcare Center of Benton. She was born on Saturday, September... View Obituary & Service Information

The family of Virginia M. Grosco created this Life Tributes page to make it easy to share your memories.

Send flowers to the Grosco family.