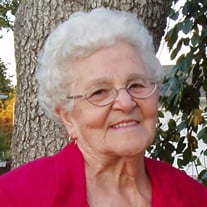 Vivian M. McClerren, age 95, of rural West Frankfort, IL, passed away peacefully at 4:07 p.m. on Monday, August 17, 2020, in the Herrin Hospital of Herrin, IL. She was born on Monday, March 2, 1925, east of West Frankfort, IL, in Franklin County, the daughter of Raymond Roy and Goldie Gretchen (Williams) Gray. Vivian was united in marriage to Carl Herbert McClerren on Friday, October 19, 1945, by his Sister Opal Jeffreys at her home in Thompsonville, IL, and together they shared nearly 64 years of marriage until his death on Sunday, August 23, 2009. Vivian’s working career was managing her home and seeing to the needs of her family. She did work for a short time early in her lifetime at the Smoler Brothers Dress Factory in Herrin, IL. She is a member of the Union Freewill Baptist Church of rural Thompsonville, IL. In her spare time she enjoyed sewing, having made many of her daughter’s clothes, cooking and collecting recipes and working in her flowers and garden at the house and helping her husband on the farm. She enjoyed spending time outdoors in the country and the gatherings with the family. The many memories that have been created will now be cherished by those she leaves behind. She is survived by two daughters and one son-in-law, Janice M. and Ed Baker of Maryville, IL, and Sandra C. Hall of rural West Frankfort; son, Gale A. McClerren of rural West Frankfort; four grandchildren, Deanna Rainey and her husband, Jack of Granite City, IL, Tracy Walters and her husband, Robert of Edwardsville, IL, Eddie Baker and his wife, Suzanne of Lee’s Summit, MO and Amanda Kodros and her husband, Tom of Matawan, New Jersey, eight great grandchildren, other extended family and many friends. She was preceded in death by her parents, husband and sister, Margaret Gray. Arrangements were entrusted to Stone Funeral Home, 1201 E. Poplar Street, West Frankfort, IL. The time of visitation for the immediate family was from 2:00 p.m. until 2:45 p.m. on Saturday, August 22, 2020, at the funeral home. Following the time of visitation, the public graveside committal service was at 3:15 p.m. in East Fork Cemetery, located east of West Frankfort, with Rev. Eddie Paul Davis presiding. Those attending the graveside committal service gathered at the cemetery prior to 3:15 p.m. Interment was next to her husband in East Fork Cemetery. Pallbearers were Keith Browning, Kendall Browning, Randy Browning, Michael Browning, Brad Browning and Danny McClerren. For those who preferred memorial contributions were made to the “Organization of Donor’s Choice”. Memorial contributions envelopes were available at the funeral home or were mailed to the Stone Funeral Home, 1201 E. Poplar Street, West Frankfort, IL 62896. For additional information please contact the funeral home by calling 618-932-2161. DUE TO HEALTH CONCERNS RELATED TO THE COVID-19 VIRUS AND BY THE SIGNING OF EXECUTIVE ORDER BY THE ILLINOIS GOVERNOR, it was REQUIRED persons wear a mask and social distance themselves from others if they were planning on attending the immediate family visitation or public graveside service.

The family of Vivian Marie McClerren created this Life Tributes page to make it easy to share your memories.

Send flowers to the McClerren family.