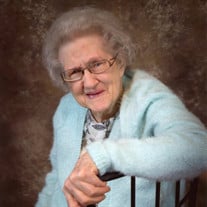 Wanda L. Willis, age 91, of McLeansboro, IL, passed away peacefully, at 12:01 a.m. on Monday, July 17, 2017, in the McLeansboro Rehabilitation & Health Care Center. She was born at home south of Thompsonville, IL on Monday, October 5, 1925, the daughter of William Edgar and Viola “Ola” (Summers) Vaughn. Wanda was united in marriage to Donlee Glenn Willis on Wednesday, December 4, 1946, in Harrisburg, IL and together they shared over 36 years of marriage until his death on August 8, 1983. She never worked outside of her home but enjoyed seeing to the needs of her family and managing her home. Early in her life she attended and was a member of the Mt. Zion Freewill Baptist Church south of Thompsonville. After she was married and living in McLeansboro, she and her husband attended at the First General Baptist Church in McLeansboro. Earlier in her lifetime she enjoyed playing the piano and bowling and while her husband was living they both were active members of the Hamilton County Saddle Club and the VFW of Carmi, IL. She also enjoyed visiting with family and friends, crocheting, fishing, gardening and working in her yard. Her family was a very important part of her life. She was always interested in all of the many activities, especially those of her grandchildren. Those she leaves behind will cherish the many memories that have been created. She is survived by two daughters and sons-in-law, Terry and James Hunt and Sharon and Gary Curtis all of McLeansboro; four grandchildren, Christina Hunt Webb and her husband Scott of Blairsville, IL, Kellie Benbrook of Enfield, IL, Joey Curtis and his wife Leanna of McLeansboro and Nicole Bowers and her husband Chris of McLeansboro; twelve great grandchildren, Brittani Young, Cassie Young, Taylie Payne, Brandon Benbrook, Landon Benbrook, Cherokee Benbrook, Arianna Walters and her husband Casey, Rylee Curtis, Arizona Curtis, Brook Bowers, Gillian Bowers and Cole Bowers; three great-great grandchildren, Paxton Walters, Carson Harrelson and Payton Benbrook, other extended family and many friends. She was preceded in death by her parents, husband; two sisters, Alma Kimmel and Ruby Clayton and three brothers, Clarence, Lloyd M. and Charlie Vaughn. Arrangements for Wanda L. Willis were entrusted to Stone Funeral Home, 1201 East Poplar St., West Frankfort, IL. The time of visitation was from 11:00 a.m. to 1:00 p.m. on Thursday, July 20, 2017, at the funeral home. During the time of visitation a “Reflection of Life” DVD Memorial Tribute featuring special people, places and events in Wanda’s life was presented to the family and friends. Following the time of visitation the funeral service was at 1:00 p.m. with Pastor Mike Cash presiding. Comments of memory were presented by granddaughter Nicole Bowers and great granddaughter Gillian Bowers also presented comments of memory and read a letter from great granddaughter Brook Bowers. The prelude and postlude musical selections were recorded piano selections. Special recorded vocal musical selections presented during the service were “Don’t Cry for Me” and “Heaven’s Now My Home” both by Libby Allen and “Go Rest High On That Mountain” by Vince Gill. Interment followed next to her husband Donlee in Mt. Zion Freewill Baptist Church Cemetery located south of Thompsonville, IL. Pallbearers were Landon Benbrook, Brandon Benbrook, Mike Benbrook, Aaron Pullian, Joey Curtis and Landon Oestreich. For those who preferred, memorial contributions were made to “Mt. Zion Cemetery Fund” and mailed in care of Stone Funeral Home, 1201 East Poplar St., West Frankfort, IL 62896. Memorial envelopes were available at the funeral home. For additional information please call the funeral home at 618-932-2161.

The family of Wanda Lee Willis created this Life Tributes page to make it easy to share your memories.

Send flowers to the Willis family.